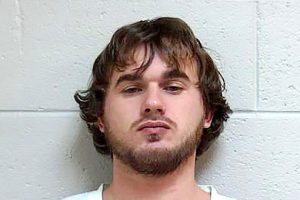 Putnam County, Georgia – A man was shot after trying to break into a residence in Eatonton Tuesday night.

According to Putnam County Sheriff Howard Sills, 911 dispatch received a call from a homeowner at around 11:30 p.m. saying that a man with a knife was in a tree.

Deputies were dispatched to the scene but while enroute they received another call from a different homeowner that the suspect was now trying to force his way into their house.

The Sheriff said 28-year-old Hunter Harrison smashed a window with a brick before he tried to force his way into the home through a set of French doors.

The homeowner heard the noise and armed themselves with a .45 caliber pistol before warning Harrison they were armed. Harrison ignored the warning and broke another window out with a barbell he found outside and entered the home.

He was immediately shot by the homeowner in the arm. After firing, the homeowner retreated to a bedroom in the home and barricaded themselves inside until police could take over.

When deputies arrived at the scene, they discovered Harrison lying on the floor, bleeding from his gunshot wound and floundering about.  They tried to detain him but he became aggressive and uncooperative with law enforcement.

Splattering blood around the kitchen as he battled deputies, Harrison shouted profanities and broke free their grasp then tried to make his getaway through a second story door. Harrison failed to notice, however, that the home was being renovated at the time and there was no deck, just open space. Harrison fell 9 feet to the ground where deputies found him soon after.

Despite what had already occurred to him, Harrison continued to fight, and deputies were forced to resort to pepper spray and feet shackles in order to restrain him from running away.

Harrison continued his attempted assault on officers even while being transported by ambulance to Medical Center Navicent Health in Macon for treatment of the many injuries he’d sustained throughout his ordeal. Last reports were that he was in surgery to remove the bullet lodged in his arm but is expected to survive.

Sheriff Sills said Harrison has been in frequent contact with law enforcement over a number of years and was still on probation for a 2014 burglary in Putnam County. He was also arrested for damaging government property in 2016 and driving on a suspended license and giving a false ID to police in 2018.

Sills went on to say he’s fed up.

“These hoodlums make me sick. He’s got a twenty-page rap sheet and he’s over at the hospital, taking up a bed where someone more important, who might have corona virus, might need it.”

The homeowner in this situation did a lot of things right. Which ones stand out to you? Read here for the latest tactics and techniques for home defense with the Complete Home Defense – Tactics For Defending Your Castle.