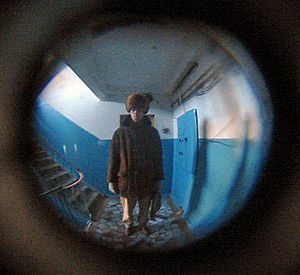 Cobb County Georgia – A 17-year-old defended his home Sunday night after 3 suspects forced their way into his house.

According to local law enforcement, 21-year-old Machavellia Bagsby, 21-year-old Taruss Miller, and an unidentified 16-year-old male forced their way into a home located on Olive Springs Rd. at around 9:00 p.m.

A teen living in the home got to a gun and fired at the intruders, killing Bagsby and wounding Miller in the leg. When officers arrived at the scene, they found Bagsby dead but no sign of his accomplices.

A neighbor’s Ring Surveillance camera footage obtained by Fox 5 showed Miller begging the residents for help. Asking them to call police and saying he’d been shot.

He was arrested and while the juvenile accomplice wasn’t immediately located, he was soon found as well. Both face charges of aggravated assault, attempted armed robbery, burglary, and possession of a firearm on top of murder charges since their participation in the commission of a crime led to Bagsby’s death.

In an interview with Fox 5, neighbors in the community said they thought the 5-6 gunshots where fireworks at first.

“I was like, ‘Who in the world is setting off firecrackers with this corona virus,’” said one unnamed woman who went on to say, “It’s very scary and unnerving. This is a very quiet neighborhood. Families, lots of good families in this neighborhood.”

“It would be nice to know if they were targeted or it was random,” said another neighbor. “Because if it’s random, it’s obviously more frightening. I don’t live in an area that you would drive through and say ‘Hey, these people have a lot of money.’”

Cobb County authorities say they will not be pressing charges against the teenage shooter for defending his home, but the investigation is still ongoing and are requesting anyone with information to call 770 499-3945 or email [email protected].

Home defense is something that should be planned, discussed and rehearsed with the people living in your home so that everyone knows their role in a dangerous situation. Read here for the Complete Home Defense – Tactics For Defending Your Castle for the latest tactics and techniques for self-defense.